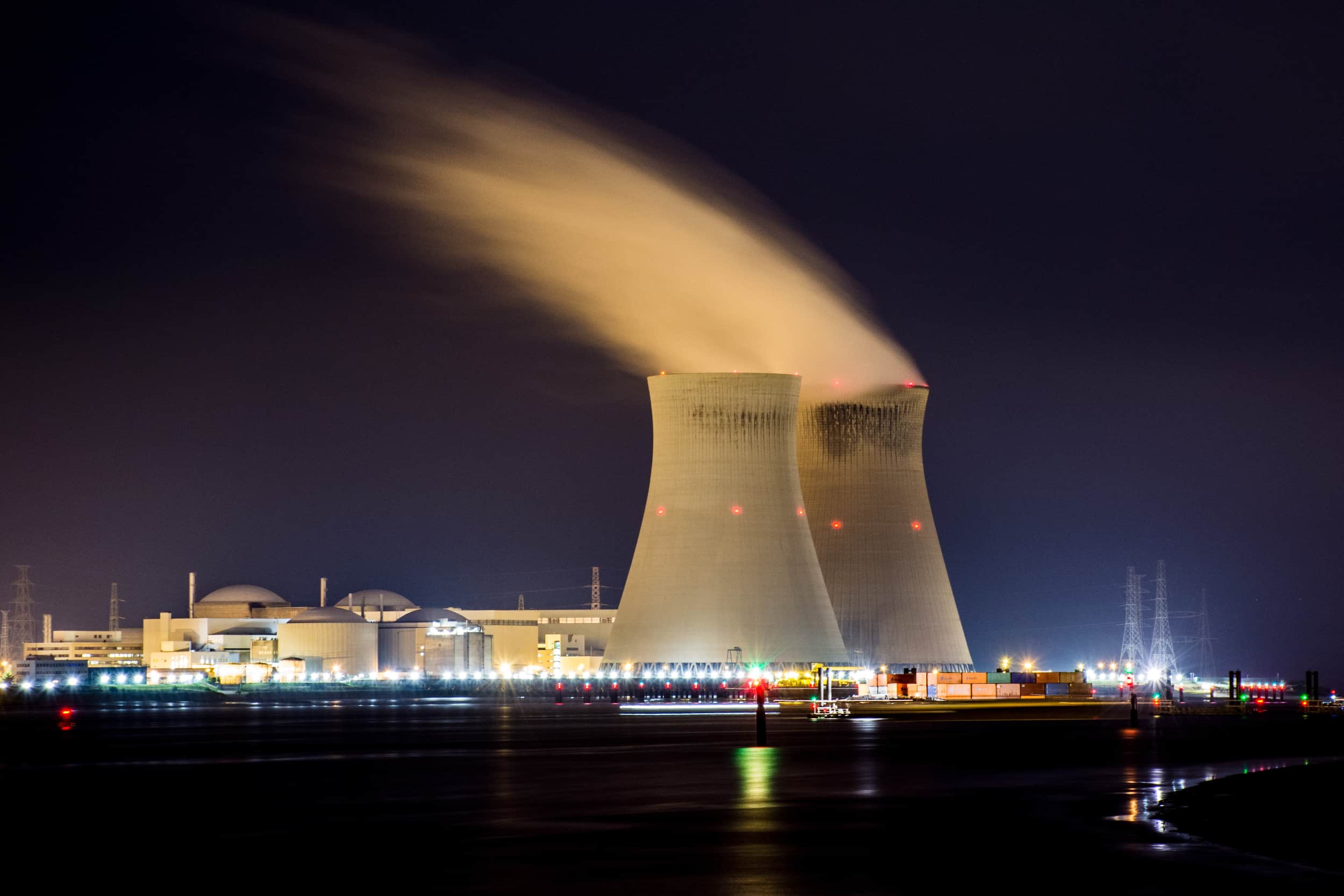 Published
March 3, 2022
Share on social media:
Enter your email to subscribe!
Thank you! Your submission has been received!
Oops! Something went wrong while submitting the form.

For a truly 24/7 carbon-free future, the way we generate electricity must change. As our reliance on fossil fuels decreases, other energy sources need to fill the gap. The European Union has recently decided to classify nuclear energy as a green energy source. But the question remains: Is nuclear energy truly carbon-free?

Nuclear labelled as a green energy source is a welcome development for many. For others, the risks of environmental or societal harm from nuclear accidents and radioactive waste far outweigh the benefits.

In this article, we’ll take a look at both sides of the debate and explore the pros and cons of whether nuclear power could provide a short-term solution for a stable source of baseline, low-carbon energy.

At the start of February 2022, the European Commission approved in principle their Complementary Climate Delegated Act, which brings natural gas and nuclear energy into the EU taxonomy for sustainable activities. This taxonomy, also known as the green energy list, is intended to help guide private investors toward “green” energy activities that will help achieve climate neutrality.

The Complementary Act has gone ahead despite controversy, backlash, and accusations of greenwashing. The Draft Act was quietly released on New Year’s Eve 2021 and created deep divisions with the bloc.

Germany, Spain, Austria, and Luxembourg are among those countries that condemned the labelling of nuclear as sustainable. On the other hand, pro-nuclear countries including France, Poland, Bulgaria, and Finland support the new classification of nuclear as green.

The decision to include nuclear power wasn't taken lightly. Valdis Dombrovskis, Executive Vice-President for an Economy that Works for People, stated:

“Our mission and obligation is climate neutrality. We need to act now if we are to meet our 2030 and 2050 targets. Today's Delegated Act is about accompanying the EU economy in the energy transition, a just transition, as a bridge towards a green energy system based on renewable energy sources. It will accelerate the private investment we need, especially in this decade.”

Provided there are no objections, the Act is expected to enter into force on 1st January 2023.

There are also strict conditions connected to the management of nuclear plants, which will have to follow high standards for safety and minimise radioactive waste. Any new plants must receive a construction permit by 2045 and use the best available technology.

How long nuclear remains within the nuclear energy EU taxonomy could depend on a range of factors including the speed at which renewable energies can be deployed. The taxonomy will be reviewed and amended as science and technology advance. But for now, what role could nuclear play in our transition toward a 24/7 carbon-free future?

The potential role of nuclear in the energy transition

As we move toward a zero-emissions future, one of the main points of contention is whether nuclear energy should form part of the solution. It’s clear that to meet net-zero emissions by 2050, global electricity generation needs to more than double while moving away from fossil fuels.

The problem is that while solar and wind energy can absorb much of the new electricity demand, they can't currently manage it all. Challenges also arise around how to store energy from renewables. Current battery technology can store renewable energy for hours, but not days. Additionally, electricity production by solar and wind facilities can vary depending on weather conditions. To decarbonise the production of electricity, there need to be other reliable sources of low or zero-carbon electricity that can be produced on demand — known as firm generation. This is the gap that could potentially be filled by nuclear power.

Researchers at Princeton University modelled a range of scenarios looking at what’s needed to achieve decarbonisation in the US by 2050. The results showed that the amount of firm generation needed will remain fairly constant, even with far more renewable energy than current levels. The researchers proposed that increasing nuclear power generation in the US to three times the current level could achieve the country’s decarbonisation goals.

This position is echoed by other research showing that the best strategy to decarbonise electricity is to include low-carbon options that are capable of firm generation. This isn’t just limited to nuclear energy for 24/7 Carbon-free Energy, but also includes bio-energy and natural gas with carbon capture and sequestration.

Without firm low-carbon resources, decarbonisation will still be possible, but it’s predicted that the cost of electricity will rise dramatically as CO2 emission limits approach zero.

So is nuclear energy good for electrification? Some say yes — but nuclear power brings with it some risks that many deem an unacceptable trade-off. The Fukushima nuclear accident of 2011 brought into sharp focus the environmental and economic effects of radioactive waste from nuclear power plants when something goes wrong. There are also potential risks associated with terrorist attacks targeting nuclear facilities.

Nuclear is a high-cost source of energy when compared to wind and solar. The Levelised Cost of Energy (LCOE) for each source is:

It’s important to note these figures aren’t directly comparable because wind and solar produce non-firm electricity while nuclear produces firm dispatchable electricity. But they do give the indication that nuclear is a more expensive option than renewables.

Is nuclear energy carbon-free? Not quite, especially when following an LCA approach. While nuclear reactors themselves don’t produce any direct carbon dioxide once they’re up and running, the processes involved with constructing the plant and mining uranium ore do require a significant amount of energy — usually obtained from fossil fuels. This means that typically, nuclear power is considered a low-carbon energy source, and one that could help fill the gaps as we move toward a zero-carbon future.

Filling the gaps for 24/7 carbon-free electricity

Many companies are moving toward 24/7 carbon-free energy. This trend has been set by large corporations including Google, Microsoft, and Iron Mountain. The goal is to commit to achieving zero carbon emissions by 2030 or 2040. FlexiDAO is an early signatory of the 24/7 Carbon-free Energy Compact and will collaborate with stakeholders as we move toward a cleaner future.

When working toward a carbon-free future, our partner Google has stated that they’re looking at blending their purchases of solar and wind power. The intention is to combine these two key renewable sources to cover both daytime and night-time energy production. They’re also investing in battery storage alongside machine learning to optimise energy forecasting. But they’re not opposed to using advanced nuclear technologies (alongside other emerging tools including geothermal and green or renewable hydrogen) to help counteract seasonal variations in wind and solar energy.

When it comes to balancing customer demand for energy with that supplied by renewables, the Center on Global Energy Policy Columbia suggests looking toward firm low-carbon generation technologies including hydropower, advanced geothermal power, and fossil with carbon capture and sequestration systems, in addition to nuclear power.

While it's clear that we need to move toward a decarbonised economy, there is still considerable debate about how we’ll get there. Some, including the EU, believe we should “use all the tools at our disposal,” and despite its chequered history, that includes nuclear power. Others say that this power source should never have been labelled as green to start with.

There is no doubt the decision to label nuclear power as “green” was a bold move by the EU Commission. It’s unclear whether investors will be willing to back this controversial energy source. Only time will tell whether nuclear power will offer a viable alternative to fossil fuels.

Subscribe to our newsletter for the latest news on building a 24/7 carbon-free future.

SHARE
Share on social media:
Published
March 3, 2022
Request Free Demo
Enter your email to subscribe!
Thank you! Your submission has been received!
Oops! Something went wrong while submitting the form.
Blog