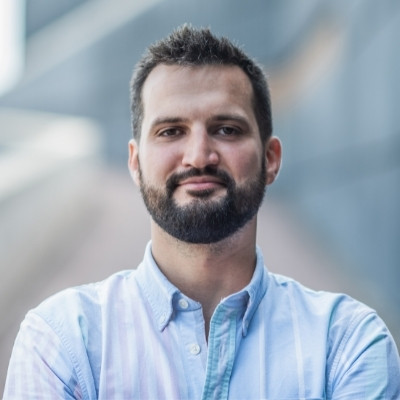 Greg is an expert in energy and blockchain development. His expertise comes from his previous role as a blockchain developer and analyst at Everis, along with his extensive experience as a research engineer at several of the world’s most prestigious academic institutes. His capabilities and knowledge in the blockchain and energy fields are regarded highly by the Energy Web Foundation. He also holds a double degree in MSc Energy for Smart Cities from KU Leuven, Belgium, and UPC, Spain.

Published
September 12, 2019
Share on social media:
Enter your email to subscribe!
Thank you! Your submission has been received!
Oops! Something went wrong while submitting the form.

Energy systems run on data. To transition towards a truly smart grid, we need to find a way to connect the energy data meter with the blockchain. Usually, if you ask the question, "How do you provide energy data to the blockchain?" to someone within the energy & blockchain industry, the answer for most is simple: oracle.

The more cautious ones will say "some sort of an Oracle,” adding even more confusion to the answer and effectively ending the topic by pointing to some mythical creature.

What on earth is this "Oracle"?

Smart Contracts (“programs on blockchain”) are good at working with the data already on the blockchain. However, they cannot just “know” the real-life data by themselves, like a water polo match score. Such information needs to be fed into a smart contract reliably.

In this sense, an oracle is any service that (reliably) provides the energy data to the blockchain.

Let’s follow the example of a water polo game. It usually works like this: through a smart contract, someone places a bet on the outcome of a water polo match. Then one or more of the oracles [1,2,3,4] would provide the game’s score to the smart contract. On top of that, there could be various dispute mechanisms to ensure that data’s ultimate correctness. All this works thanks to the simple fact that the final score of that water polo game is publicly accessible. As a result, one side wins, someone loses (or it’s a tie).

Let’s try to make the energy data oracle then.

Well, with energy data, things are not that “easy”...

Source of truth for the energy data

Among all utilities (electricity, gas, water, heat), electricity requires the most complex system to run. There are plenty of different roles needed just to keep your lights on during the night.

What is the problem with this energy data oracle?

The smart meter is the source of truth, right? So let’s just use that data!

There is a catch. The smart meters currently in place haven’t been thought for such a shift in data management and aren’t ready for new cooperative Internet. Only the parties directly communicating with the meter can be sure that the energy data comes from there. There is no efficient way to ultimately prove to external parties that the data came from that specific meter. No proof, no deal, no cooperation. Unlike the water polo game score, there is no one to cross-check the data (except the grid operators /and utilities).

There is asymmetric cryptography to provide the necessary proof!

Yes, but the roll-out of the smart meters in Europe already happened. Unfortunately, the bet was placed on the symmetrical cryptography for efficiency. If they had used asymmetrical cryptography, it would have allowed proper co-operative smart grids instead. Small detail, massive difference. Good job, Europe! The next chance arrives in just 15 years.

A not so trusted setup

Let’s use additional IoT devices to retrofit (already?!) the smart meters with asymmetric cryptography, top-notch cyber-security, and let’s add a light blockchain node to that, oh yeah! Let’s pack it in a cool 3D printed case and call it 'IoT Oracle' or, even better: 'Hardware Oracle'!

All of this sounds great, but unfortunately, there is a catch again. The grid’s physical reality is that you have only one cable coming to your house.

Then, if you look at the smart meter with which this cable ends, noticing all the security seals and service stickers, you can make sure that “your” smart meter is not yours.

Someone else (usually the grid operator or utility) is responsible for checking how much electricity you produce or consume using their smart meter. For example, in the supermarket, if the final cashier check would be entirely up to you, you would charge yourself for bananas instead of a new PlayStation 4 or simply walk out without paying.

An external party has to be responsible for the meter. Now, a new device would be a “hardware oracle”. This IoT device will require the data to be obtained directly from the meter itself (remember the validation problem?), meaning that it will still have to interface with the meter physically (somehow). This interconnection provides a massive security bridge that diminishes the whole concept.

As humans, as long as it’s in our interest, we will do everything to cheat the system. In this case, the motive is straightforward; most of us want to pay less (electricity consumers) or earn more (electricity producers).

You have to bear in mind that the smart meters are usually located at the end-users’ premises, buildings, or even inside apartments. In that case, you can ask yourself: “Can I trust the data that originated in my neighbors’ house, ultimately coming from such meters (or IoT devices connected to it), to keep it as an ultimate truth on a database? Can someone simply update that?".

Meters most likely will always have a chance to be tampered with, manipulated, broken, bypassed, or hacked. There is even a website offering all kinds of meter hacking services and tools.

‍So, what is the oracle meter?

Similarly to Pythia (an ancient Greek oracle), the ultimate data oracle meter simply doesn't exist (yet). The immediate problem is in legacy data management technology in the meters, which weren’t designed to share and prove the data source to external parties reliably.

However, the more significant challenge to overcome is the electrical grid’s physical and logical nature. The single entity (regulated monopoly is not evil!) is responsible for all of its endpoints (smart meters), beyond anyone's ultimate control.

The future solution would be to rethink together with the regulators the setup of the system (Nature 2.0) and the next smart meter update/rollout. However, going toward today’s modern smart grid solutions, like real-time trading or local self-consumption, we need to have means to handle possible fraud and unreliable meter data. The extent to which this can be tolerated depends on regulators, specific use cases, and market specifications (i.e., I-REC Error Management).

Thinking of a blockchain as a cooperation and orchestration backbone for the truly smart grids, the technological means to fit the energy system’s realm with the blockchain should be provided (i.e., data invalidation on the blockchain). Without such measures, we could get stuck for a long time with meaningless Proof-of-Concepts, instead of boosting a real fight against climate change today.

Check out our ERC-1888 standard proposal, where one of the features that allows tackling management problems and errors on meter data by issuing transferable certificates (claims) on the blockchain.

Grzegorz Bytniewsky, co-founder & CTO of Flexidao, is an expert in energy and blockchain development. His expertise comes from being a blockchain developer and analyst at Everis and his extensive experience as a research engineer at the Universities of Tohoku (Japan), the Hong Kong Polytechnic University (Hong Kong) and CITCEA (Spain). His competence is recognized by the Energy Web Foundation. He’s also a graduate student of a double degree in MSc Energy for Smart Cities from KU Leuven (Belgium) and UPC (Spain).
SHARE
Share on social media:
Published
September 12, 2019
LEARN MORE
Enter your email to subscribe!
Thank you! Your submission has been received!
Oops! Something went wrong while submitting the form.
Blog